In March of 2017, Microsoft released its first rendition of Microsoft Teams; with it, a new way to make phone calls. Microsoft Teams is the latest in a long line of Microsoft Phone System platforms dating back to around 2007. This latest phone system, more affectionately known as Teams Voice, is well refined, feature-packed, integrates seamlessly with other back-office products, and has various options to choose from when it comes to customizing the service. There are a host of licenses that can be purchased ala carte and in no time, end users can be making phone calls using their PCs, mobile phones, tablets, or any other Internet-connected device that runs a Windows, Mac OS, or Linux operating system.

Given the ease with which Teams Voice can be deployed, many customers will hurry their way to the finish line, assigning the proper license SKUs, sending out a quick communique to their end users, creating a few helpful articles, and even some “how-to” videos to assist their company community with onboarding this great, new service. This deployment model, however, is not the best way to roll out the service.

One of the most often overlooked elements of the Teams Voice service deployment is the underlying road all those high-fidelity sounds will travel on. When end users make their first few calls it is not uncommon to hear remarks like, “it was choppy,” “I lost you there,” “can you repeat that,” “you cut out…” and others.  It is important to remember that there are several, all equally important, elements to a quality phone call.  By quality, of course, I mean, those remarks above are not part of the equation.

The first and foremost element of Teams Voice is the service itself. Microsoft provides for a 99.99% uptime SLA and a 99.9% voice quality SLA. Next, we have the endpoint which is most often a desktop PC or a mobile phone. The desktop is a special beast that warrants its own taming.  Remember when the telephone was just a telephone?  Nowadays, Teams Voice softphones, a.k.a. the desktop, are running two or three browsers, each with 28 tabs open, an outlook email client, and a whole host of other applications that are sucking the life out of the desktop’s memory, CPU, and disk resources. That means Teams Voice gets to use what resources are left for connecting a phone call successfully.  It’s not unfair to say that the endpoint itself is responsible for at least 1/3rd of the voice quality issues experienced by Teams Voice users. For these users, the fix is simple: close some apps that aren’t being used. Your telephone is working too hard with too few resources. Keep in mind that any real-time app (such as voice) is going to be very clear (no pun intended) when the quality is subpar. It’s not like email, where you see a message arrive in your inbox, and it should have arrived 10 minutes ago. You have no way of knowing!

We’ve talked about the Teams Voice service and the desktop, so what’s left in terms of doing your diligence and proper planning for a successful rollout? The network, the network, and, you guessed it, the network!

The network might be the single most crucial element to a successful Teams Voice rollout.  Unfortunately, it is also the set of tasks that gets the least attention.  Why? Your guess is as good as mine. Perhaps it’s because everyone thinks of Microsoft Teams as “just another app” on the desktop?  Maybe it’s because “we have a 1 GB Internet connection, so we won’t have any problems”?  Every successful Teams Voice deployment has at least 1 thing in common; a full network readiness plan!

Microsoft Teams Voice is a phone system now; a Voice Over IP (VoIP) system. As such, there are at least five (5) things EVERY customer should do to prepare for the rollout of Teams Voice.  Here they are, and in no particular order (because they’re ALL important):

5. PLANNING – There cannot be enough emphasis on the importance of planning your deployment, especially with respect to network, security, and firewall components. It is not enough to convene a meeting and discuss the network. At a minimum, there should be detailed tables prepared which clearly denote the traffic, traffic type, port(s), transport protocols (TCP/UDP), and direction of flow (inbound/outbound/both).  Here is a common example for a Teams Direct Routing customer: 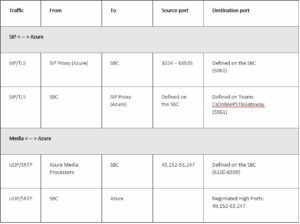 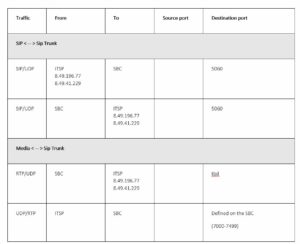 Be sure to capture these per your requirements and input and feedback from your vendor.

Microsoft Teams Voice is a high-quality product. But, like all things, it requires nurturing, diligence, and planning to achieve the optimal end results.  Think of it as a racetrack where you can reach top speeds with the right driver, the right car, and most importantly, the perfect track. Choosing not to do your homework (not doing those 5 things above), is like asking that same car to achieve the same speeds on the same track after a foot of snow has fallen on the track.  You MUST pave the roads!  The underlying road is the path voice travels. Luckily, our team of Teams Voice experts are skilled at preparing organizations for rolling out the system and can help your organization decide if Teams Voice is right for you.

To learn more about the latest Teams Voice updates and how the cloud-based phone system can enhance communication within your organization, join us for our upcoming “You Already Own It” session on July 28, 2022. We hope to see you there.

Planet Technologies repeatedly demonstrates the ability to not only realize the power of a single point Microsoft Dynamics CRM solution, but in also using the platform to quickly develop and deploy a large number of line-of-business applications across a hybrid of internal and external resources for our customers. I appreciate their efforts and focus in being a true partner with the client, and with Microsoft, in order to bring about the most value. A win for everyone!